At the end of May when the first pied flycatcher chicks were just hatching in Yarner Wood, I joined Malcolm Burgess, Conservation Scientist for the RSPB, to get an insight into some of the cutting edge science that is taking place under the oak canopy of Yarner Woods. The breeding season is such a short window, that scientists work around the clock to capture all the vital data that will help them understand how woodland birds are faring.  This science laboratory in the woods is helping scientists build a picture of the factors affecting the productivity and population of the pied flycatcher and other key woodland bird species, such as the wood warbler, that are in steep decline.

In the last pied fycatcher blog (part 2) we reported that the first pied flycatcher chicks in Yarner had just hatched.  Now, a few weeks on the Nest Record Scheme volunteers have made their final tallies for this year, they have recorded 210 pied flycatcher chicks fledged from Yarner.  This is just a bit better than the long term average with 4.2 young fledged per nesting attempt and is exactly the same as 2015. In the Bovey Valley they actually did much better, with 192 fledged and 6.2 young fledged per nest. Scientists have also successfully retrieved 7 geolocators from the 20 male pied flycatchers tagged last year, which they hope will reveal new information about the where Yarner’s pied flycatchers spend the rest of their year – potentially refocussing efforts for conservation work for this species.

A few weeks ago, in the midst of the breeding season, I set off with Malcolm for an action packed morning of data collection around Yarner Woods. Our first task was to visit a pied flycatcher nest box where Malcolm was expecting eggs to hatch that day.  As we carefully peered into the top of the box, there were three tiny pink, featherless chicks just an hour or so old.  Malcolm explained that by recording the exact date of hatching this enables scientists to make comparisons with previous years and to look at how this date ties in with food availability. Malcolm said he was hoping to find female birds in some of the boxes and fortunately in the next box, the female pied flycatcher was sitting incubating her eggs.  Malcolm was able to record some vital statistics (her weight and the length of her wing) and to attach a numbered ring to her leg so she can be identified in future. 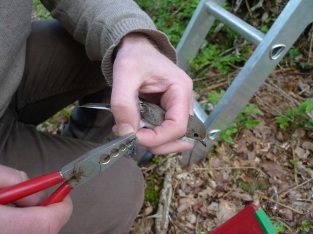 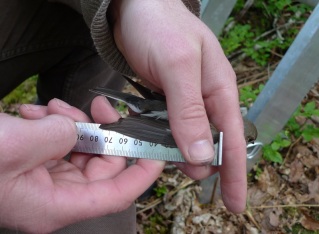 Ringing pied flycatchers allows scientists to gather vital information on the state of the population. Malcolm said once the chicks were a bit older, he rings all the chicks in nests across the Reserve. The British Ornothological Trust (BTO) who co-ordinate ringing across the country, explains why ringing is so important for understanding bird populations,  ‘While ringing data can still be used to study migration and dispersal, today they are primarily used in the study of population change. …. the basic principle is relatively straightforward – bird numbers are determined by the number of fledglings produced and the subsequent survival of both those youngsters and their parents.’

As we walked from box to box, Malcolm was on high alert. He was looking for male wood warblers in the canopy to see if he could identify individual males that are known to a sister RSPB/Devon Birds wood warbler study.  Once he spotted a male bird through his binoculars he was looking to see if they were ringed and he was recording a gps position for each bird.  Malcolm explained that scientists are using Yarner and other sites such as Fingle Woods, to study the factors affecting breeding for wood warblers (a blog to follow shortly!)

As we walked and talked through the woods, the myriad of studies Malcolm described was a little overwhelming for the uninitiated! Hidden away on trees Malcolm showed me tiny temperature loggers, which record information on the micro climates throughout the woodland. He explained that weather data has been found to have a significant influence on the timing of breeding.  Malcolm has also been studying the abundance of flying insects and caterpillars in Yarner – a key food source for woodland birds feeding their chicks.  Caterpillars feed on the young oak leaves high up in the canopy, so scientists have developed an interesting method to study them. Collection trays are laid out under the oak trees (the caterpillars’ favourite food) to collect the caterpillar poo or frass. Collecting the frass twice a week, scientists can calculate the biomass of caterpillars and the timing of their emergence. 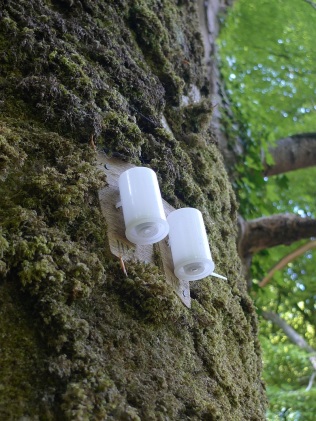 Temperature loggers positioned on a grid throughout the woods 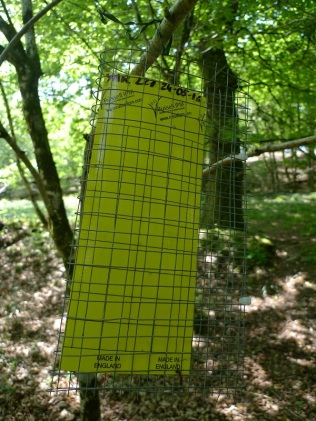 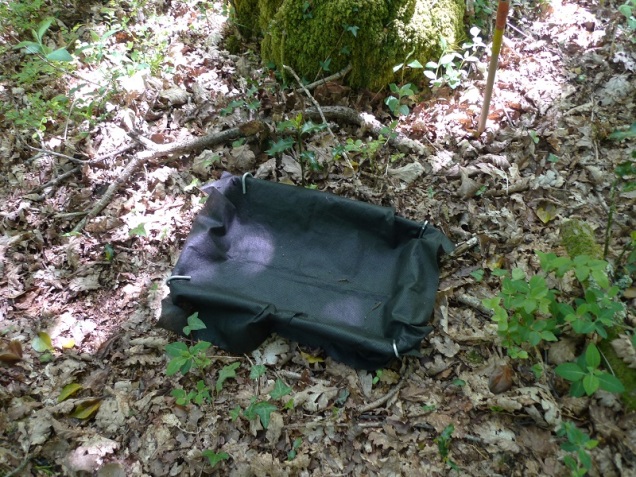 Collecting tray sitting at the base of an oak tree, for collecting caterpillar poo or frass

By the end of the morning I was stuck by the fact that collecting all the data is just the start – now, at the end of the breeding season, the dedicated work of analysing all the datasets begins.   Malcolm explained that through looking at all the factors in the bird’s breeding grounds, scientists are already starting to rule things out and this is pointing the focus at the rest of the year.  This is why the geolocators are so important.  Another 20 of these miniature devices are being fitted on pied flycatchers right now before the birds leave Yarner Wood to fly south. Scientists are currently analysing the data from the 7 loggers retrieved this year – it will be very interesting to learn where the pied flycatchers go once they leave their breeding grounds in Yarner Wood.

For all the up to date scientific news…
Twitter: @piedflynet
Website: PiedFly.Net is a science based non-profit organisation co-ordinating community participation in monitoring Pied Flycatchers and other hole-nesting woodland birds to contribute to science and monitoring projects.

3 responses to A science lab in the woods