Volunteers turned out in force at the Bovey Valley Woods last week to join the conservation group led by Jim White. Meeting at the Lower Trendlebere Down car park, a spectacular autumn view along the valley provided the backdrop for him to brief the volunteers on the tasks for the day.

On one side of the track known as the Old Manaton Road, the open heathland of Trendlebere Down begins to blend into the woodlands at Pullabrook on the other side of the track. Jim explained “at this transition point between the two habitats, a cluster of small self-seeded conifers needs to be hand pulled to create space for the native species. This is where the birch, rowan and oak will grow up and a layer of heather and bilberry ground flora will thicken up in the additional sunlight”.

Both regular and new volunteers worked hard in the autumn sunshine to pull up and cut down the conifer seedlings, releasing the native trees and wildflowers. One of the new volunteers, Dom explained how he had been working for the National Trust volunteers at Parke and was “enjoying a day further along the Bovey Valley with the Woodland Trust”. Nick, another volunteer who also shares his time volunteering with the National Trust and Devon Wildlife Trust, said “it keeps me busy”. He also reflected on being involved in the forestry industry from the 1950s as it evolved and conservation priorities have changed. Back then he was planting many conifers as there was a great demand from the timber industry. In more recent years, the move towards woodland conservation has introduced Continuous Cover Forestry to bring back more broadleaves.

Keeping warm on an autumn day – volunteers at work 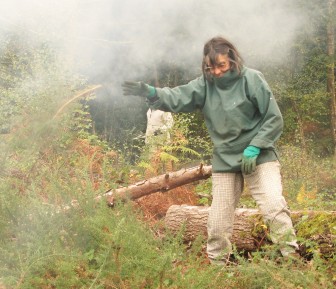 Keeping warm on an autumn day – volunteers at work

As Jim’s regular volunteers know well, having a fire on site is an essential part of the day, as are the hot cups of tea made from the boiling campfire kettle. Once steam was up, Jim shouted “Brew up!” and the volunteers stopped their hard work for a break and a chat.

Volunteers on the march 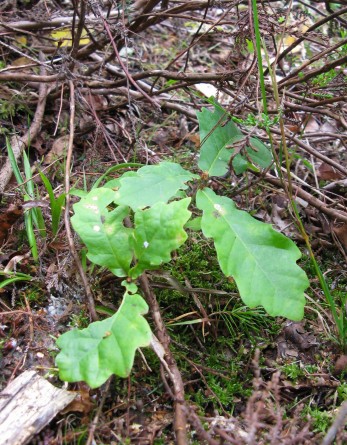 After lunch, and once the task was completed, the happy band of volunteers walked down the Old Manaton Road to Houndtor Wood. There they rolled up some of the temporary fencing around the deer exclosure plots to make space for some winter felling operations beside the Becka Brook. Once the thinning work has been done the fences will be reinstated to protect regenerating broadleaf trees from the unwanted attention of the browsing deer. It just goes to show that many different conservation tasks are all in a day’s work for the Bovey Valley woodland volunteers.