This winter some weighty timber is being felled and extracted from Houndtor Woods in the Bovey Valley, and cutting the bulky stems is just one part of the complex operation. These Douglas fir and spruce trees were planted over 50 years ago to produce timber and have now reached a size where they can be converted into high quality structural beams, though the challenge is to extricate the cumbersome cut stems from steep terrain along twisting forest tracks. The operations are planned with care to move the timber in the largest sections possible while preserving the woodland soil.

Since the trees were planted, the attitude towards habitat conservation has changed as our knowledge of how ecosystems function has grown. For the nature reserve managers, the restoration of ancient woodland on this forestry plantation is the key challenge. The principles of Continuous Cover Forestry are followed which, over a period of many years, will gradually transform the uniform conifers to a multi-layered blend of broadleaved species and provide a haven for wildlife. Recent research into CCF has shown that the native woodland can’t be re-activated until the shade from the high canopy is reduced, and this can be measured in terms of the volume of standing timber. This scientific approach has been followed in the Bovey Valley using small fenced plots where woodland regeneration has been studied while keeping the browsing deer away. In these test plots, the current felling programme is being directed by local woodland manager Jim White who has been calculating the volume of standing timber and marking the trees to be removed. He explained that “forestry research shows that broadleaf regeneration needs higher light levels to get started and we need to reduce the timber crop density down to 20 cubic metres per hectare to let that crucial sunlight in”.

The job of felling and extracting these timber giants has fallen to Sam Pyne and Barry Green, local conservation foresters. They are experienced in working in sensitive wildlife habitats and have been using their new winch tractor and trailer to take the saw logs to the loading area at Pullabrook Woods, further down the valley. In some cases the girth of the trees and weight of the timber has required the additional help of Martin Underhill and his larger tractor with a higher capacity trailer.

Barry after felling a Douglas fir 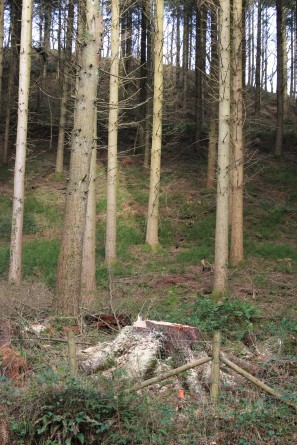 The only available route out of Houndtor Woods and along the valley to Pullabrook Woods means the saw logs must be transported across the Becka Brook. The ancient bridge at Houndtor is too old and too valuable a feature to allow tractors to haul loaded trailers over it so an old ford across the river has been opened up for the first time in many years. Each load is carefully carried through the fast-flowing water before heading off along the track known as the Old Manaton Road.

As woodland conservation also includes the protection of the local aquatic habitat, care is taken not to damage the critical spawning grounds of migratory fish. Salmon and Sea Trout use the upper reaches of Dartmoor’s rivers as their spawning grounds and the Environment Agency regularly monitor their populations in the area. Simon Lee, the East Dartmoor National Nature Reserve Manager for Natural England described how “the fish use spawning grounds in suitable areas along the river but prefer the better gravels or reds further upstream at Neadon or Foxworthy. There is a lower flood risk in these higher reaches and the fertilised eggs are at lower risk of being washed out”. The fish will also benefit from the gradual removal of the conifers alongside the river as the increased light levels should boost the invertebrate life and give the whole food chain a boost. 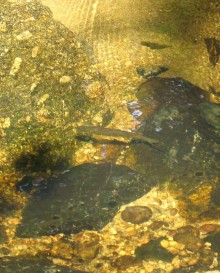 A young trout enjoying a sunny spot in the River Bovey

This restoration work in the Bovey Valley has been supported by Viridor Credits Environmental Company, via the Landfill Communities Fund.
The work also forms part of the wider Moor than meets the eye Landscape Partnership which is supported by the Heritage Lottery Fund.