Managing a nature reserve can be a complex job, requiring a good understanding of many ecological disciplines, but here at East Dartmoor NNR, a good knowledge of historical land use and local heritage helps too. To develop these competencies, the Natural England Eco Skills Conservation Assistants are, from time to time, given a project to manage. This time it was the turn of Elizabeth “Beany” Townsend to get a taste for planning and organising preparations for the archaeological investigation later in the year.

Down by the river in Hisley Wood stand the medieval remains of Vinnimore farmstead and Beany’s task was to start work on channelling water from the old track to another part of the wood. Later in the spring there will be many invertebrates and frogs that need this standing water for breeding and feeding so timing would be critical. Draining the water in January would allow it to settle in another area of the wood, leaving the wildlife undisturbed later in the spring when a team of community archaeologists will be at work.

It’s quite hard to imagine that the wet woodland here today hasn’t been here all that long but that is certainly the case. Maps of the 1830s show ploughed fields and Reg Lander of the History Hunters had previously said that “the old survey map gave us an insight into what was thought to be the entrance to Vinnimore but is actually a track from the farm to a field entrance”.

Today, a discussion between Albert Knott of Natural England and the Conservation Assistants on the whys and wherefores of cutting these trees was throwing some light on the situation. Felling trees along this old track will open up a small glade. So, in terms of the wildlife, it will improve the diversity by changing the woodland structure in this area. Albert explained that “We’ll get a greater understanding of the historical environment without taking away the wildlife features”. Wet woodland can be a transitional habitat so, in another 100 years, it could be dominated by large trees which would change the character of woodland and potentially disturb the remains of the old farm. Now is a good time to record the derelict buildings and try to protect them.

Natalija clearing a path to the old farmstead

Under Beany’s supervision the trainees set to work. Using their newly acquired skills, they felled a few of the alder trees along the track and trimmed back some vegetation along the ancient banks. In a few days, a group of volunteers from the University of Exeter would be on site to continue the task and scrape a shallow ditch for the water to run away from the features. 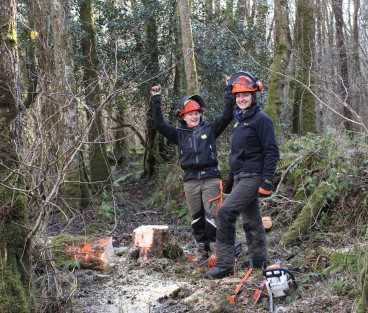 On day 2, Beany was back in action again. This time it was a weekend volunteer task and she was briefing the team about the work plan … and equipping them with tools, gloves and wellies for the day ahead. The Exeter students split up into groups; those who were prepared to get muddy headed straight for the drainage work

The channel diggers were getting stuck in, gradually getting more and more muddy. One of them found a frog which was inactive in the winter cold. It was quickly captured and moved to safety. A sherd of blue pottery was also found which kept people guessing at the age of it. An expert eye would be needed to date it but it demonstrated that signs of a previous life were around, and the future excavation may turn up some interesting finds.

Seb on the rake

One breakaway group started to clear a patch next to the ancient farm building, making way for the soil tip from the archaeological excavation. As they worked, the leaf litter was checked for hibernating dormice. None were found but the students were interested to see the signs of other woodland creatures. 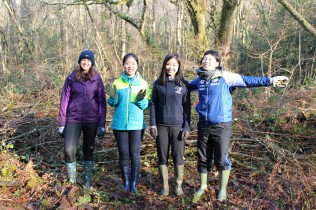 Lesya, Grace, Claire and Tomomi cleared a space for the soil tip

Mouse holes found in the leaves

Higher up the hill, some of the team were also working at Boveycombe, another derelict farmstead, revealing some of the old tracks, boundaries and remains of stone farm buildings. A fire was roaring to clear away the woody debris from the site and, as a new-found skill, some of the students were keen to learn the science behind keeping a fire going. Jim White, the volunteer team leader explained “you need to give the fire a good heart by laying the wood carefully, preventing gaps opening up in the middle and maintaining the heat”. Just to prove the point, the kettle boiled in minutes!

The student volunteers were enjoying their new experience and, judging by a few of their comments, they’ll return to the woods in the future. Emily, who had been raking leaves and piling up brash all day, said “it’s my first time but I’ll definitely come back”. Though it was a chill January day, the volunteers managed to keep warm and took a sense of a job well done back to Exeter with a smile. They worked well and played their part in preserving these heritage features; students from around the world, studying subjects of every discipline, brought together by a love of being outdoors and playing their part in a conservation team.