In this blog, Malcolm Burgess from the RSPB Centre for Conservation Science, describes the importance of monitoring invertebrates and shares the findings of some innovative research in Yarner Wood – measuring insect poo to help investigate the impacts of climate change on woodland birds.

As I mentioned in my last blog, the breeding success of hole-nesting woodland birds, such as Blue Tits and Pied Flycatchers, is thought to be dependent on the short seasonal spike in availability of caterpillar prey.  These bird species usually have one nest attempt each year and so need to correctly time breeding, to ensure that when their young are hungriest (when they are about 10 days old), enough food is available for them. Heavier fledglings are more likely to survive to become breeding birds themselves. Although these birds are able to adjust slightly, by delaying incubation after clutch completion for example, just a few days too late, or too early, can make the difference between brood death and survival. 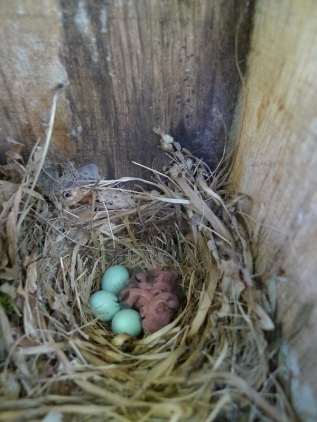 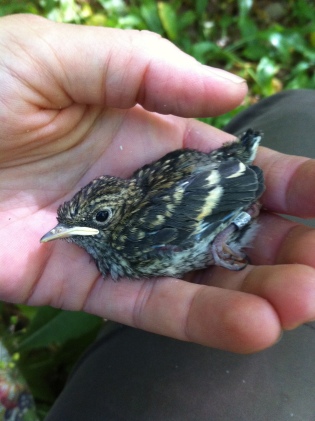 Monitoring birds’ timing of breeding and nest outcome is relatively easy, especially in nest box populations like I am involved with. Regular box inspections enable accurate calculation of when first eggs are laid, clutch size, the condition of nestlings at fledging and the number that fledge (Fig 1 and 2). Across the UK many thousands of nests in boxes are monitored annually. Monitoring invertebrates is less easy and relatively few people do this, and fewer still do so alongside detailed studies of breeding birds. But it is possible to estimate how invertebrate abundance changes during the breeding season using pretty simple techniques.

The project I am involved in, with Ken Smith (now retired form the RSPB) and the universities of Edinburgh and Exeter, is interested in invertebrate abundance and how this changes during the course of spring, and how availability and timing varies spatially across the UK and between years. To achieve this we are encouraging citizen scientists who already monitor woodland breeding birds to additionally monitor invertebrates. Linking bird and invertebrate data gets ‘bird people’ thinking beyond just birds and participating and contributing to very worthwhile and important research.

So how do we estimate invertebrate abundance and the timing of their availability? Well, for caterpillars, we collect their poo. Caterpillar poo even has its own name – frass. We collect frass in trays placed under the tree canopy. Contents of these traps are dried, sieved and then separated from other detritus. Frass is cylindrical in shape, so it rolls down paper and can be identified when magnified, and so can be separated and weighed to give us a measure per unit area (mg per m2).

We are not the first to collect frass for this purpose, but other studies tend to collect large amounts in many large traps. We needed a much simpler technique that collects manageable amounts of frass (it might be separable but this task is not the most interesting), but that can still give us a signature of the peak in availability, and so that citizen scientists feel willing to participate. Our traps are simply and cheaply made using a standard sized seed tray available in garden stores. These are lined with garden fleece material and pegged to the ground directly under the canopy of randomly selected oak trees (Fig. 3). Four traps are used per woodland and the contents collected and liner changed every 4 or 5 days. The average taken over all four traps is used to calculate the peak and duration (Fig. 4).

Although we have had some quite extreme springs since the study started, it really is surprising just how variable the timing of the caterpillar peak can be. Even at a single site, peaks have occurred in April, May and June, with site variations of up to 42 days between years. Clearly birds need to be very flexible in their breeding times if they are to be successful. Early results from the first three years of the project were published in Bird Study (Smith et al., 2011). This clearly showed a relationship between spring temperature and the timing of the caterpillar peak and that peaks occur later at higher elevations and further north. We are also able to estimate the duration of the food peak (how many days there are lots of caterpillars) and the height of the peak (an estimate of how much food in total is available). We found that warm springs have not only an earlier peak but also a shorter peak. This means in an early spring the critical time period for breeding is shorter and the requirement to breed earlier even greater. So we now have a good idea of what drives the caterpillar peak – the next stage is to link this to bird nest data.

But hang on a minute – do these birds only feed caterpillars to their young? Caterpillars are a convenient, large and readily digestible package of food for a nestling, and probably provide more bang for a buck than a lacewing or fly. But Blue Tits and Pied Flycatchers also eat many spiders and flying invertebrates. Also Pied Flycatchers breed slightly later than Blue Tits, and always have done, so are they really both eating the same things? And can they both be so reliant on a caterpillar peak?

To investigate this we need an idea of the seasonal abundance of other invertebrates alongside caterpillars, and from the same woodlands we need to know what the birds are feeding their nestlings. To quantify flying invertebrate abundance and availability we again need a simple method that can be used by citizen scientists across the UK. So over the past three years we have been using sticky traps (Fig. 5), as used for pest control in horticulture. These are hung from the branches of the same trees we collect frass from.

Early results look promising; we can see peaks in flying invertebrate availability and how availability changes through the spring. To determine nestling diet we are collecting the faecal sacs from nestlings when we ring them, we will be using new DNA bar-coding techniques to determine their diet. At sites throughout the UK we are now looking at how mismatched individual nests are and how this affects productivity and recruitment.

But we are still scratching the surface and many questions remain. Invertebrate availability peaks will vary depending not just on location and the onset of spring but also on the species composition of trees in woodlands and which caterpillar species are most common in any one year and locality. Mismatch research so far tends to assume birds only eat the winter moth, but many other species must be important and these will vary between location and between years. In time our project hopes to answer these questions too.

Look out for the research scientists in Yarner Wood this Spring – the frass monitoring starts again in mid April. With thanks to the British Ornithologists’ Union blog for giving us permission to share this blog.