Dartmoor’s woodlands are very special places for wildlife.  Located close to the Atlantic Ocean, they provide conditions for life that are not found in most of the rest of the UK. East Dartmoor National Nature Reserve is the home to a diverse assemblage of lichen, but due to their small size, these miniature marvels are often overlooked by people visiting. In this blog, volunteer Janet Ritchie reports on a guided walk along the granite tramway, where a group of local artists were introduced to the world of lichen. She also joined the Lichen Lovers, this expert group have an important role in surveying the lichen species they find on the reserve, and their lichen records are used to inform the management of the reserve.

We met at the Woodland Centre in Yarner Wood and after Rachel’s introduction to the subject, we set off into the woods. She pointed out various lichens along the way, explaining why they grew where they did. Looking at them through a magnifying lens makes them even more fascinating, as always. Rachel told us about the effects weather and air pollution have on these amazing parts of nature.

When we reached the old granite tramway through the woods, we headed along to some more open trees. As we were looking at the stunning view, a pale rainbow appeared across the valley. Luckily the rain avoided us, unlike a tiny yellow ladybird that made its way onto someone’s leg! Meanwhile, Albert Knott, Reserves Manager for Natural England, had taken some local artists to do some sketches. He joined us later to carry out a lichen survey, adding to his knowledge of lichens and management of the site. 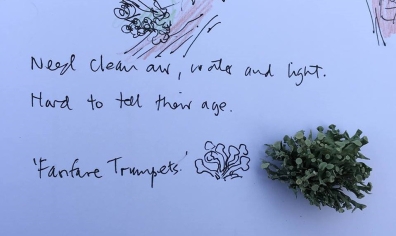 Where the trees were more open, we noticed they were covered in lichens, owing to the better light they received.  The fact they were lower in the trees also meant we could all have a better look. Our target lichens were specifically Usnea florida and Usnea articulata and we spread out to search for them, some finding more than others.

The intruiging ‘String of pearls’ 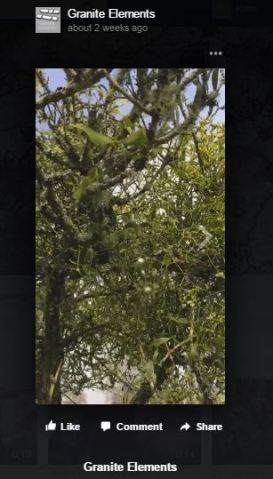 A mini film taken by one of the walkers

Albert also showed us some very intriguing ‘strings of beads’ hanging from one tree. They were very sticky to the touch and contained seeds from the mistletoe. One of the walkers even made a mini film to capture this unusual phenomenon (see link below).
…All too soon, time ran out, it had been another satisfying look at one of the many diverse areas of nature.

27 February –  The Lichen Lovers survey of Neasdon Cleave
A group of eight people, with a variety of expertise but all keen on lichens, met at the Yarner Woodland Centre. From there, Albert Knott drove us to Neadon Cleave where we set out along a footpath, looking at various lichens along the way. Those with knowledge on the subject pointed out different species and explained how and why they live where they do. I mainly stuck to surveying my usual Usnea florida and Usnea articulata, the only Latin names I can live with!

Along the public path we went through an area where conifers where removed about 20 years ago, where we found some lichen species. We then went off-piste into some older woodland. The lichens here became more numerous and obvious, even some rarities were found. Dodging earthworks and excavations made by badgers, we inspected a variety of lichens as well as taking in the glorious views across the Bovey Valley.

Having scrambled down through the woods, we came to the footpath coming up from the River Bovey. This started part two of the walk through open fields, with specific permission from the land owner. The rocks and trees here are host to other kinds of lichen, adding to their overall charm. The weather forecast for today had not been good, but we were lucky. Breezy with rain or hail showers, cloudy with some warm sunny periods, all we needed was snow!  All told it was a very good day, informative and well worth turning up for, as always.