Quietly unfolding in the woods around us is one of nature’s spectacles – for just a few weeks in May, Dartmoor’s woodlands are carpeted in a haze of bluebells.  This spring the Woodland Trust has looked to the latest technology, to encourage families to explore some of the best bluebell woods, using downloadable Follow the Fairies family trails. 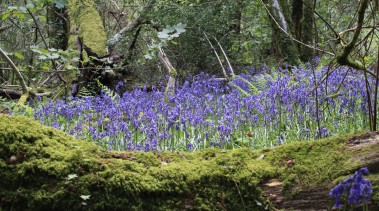 Many of Dartmoor’s woodlands have a mystical quality and at this time of year the woods are carpeted in a thick layer of mosses and ferns and lush vegetation. The imagination could run wild in places like these and this is exactly what a new interactive app, designed to be taken out in the woods, hopes to achieve.  This app contains a smart animation about Blue and Belle the woodland fairies, that come alive once you are out in the woods on a bluebell trail.  At the moment only a handful of woods are offering these special trails, but one of the locations is just a stone’s throw away from East Dartmoor NNR, at Becky Falls.

Blue and Belle, the woodland fairies 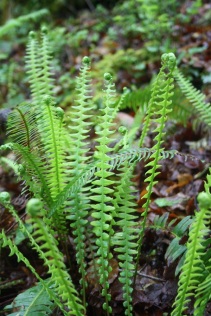 Ferns unfurl on the woodland floor

To take part, you first have to download an app onto a mobile phone or tablet.  The app is not activated until you reach the site.  Arriving at Becky Falls Woodland Park on a damp rather dark morning, the woods already had that mystical quality that could spark the imagination.  To reach the start of the interactive trail you walk across a long narrow wooden footbridge crossing the Becka Brook, you already have a sense that you are entering a gateway into an imaginary world… 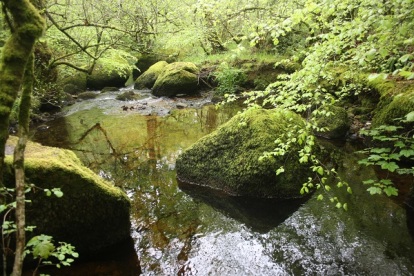 The gateway to the trail

The start of the bluebell trail is just at the far side of the bridge.  Mounted on a trail marker, you scan a black and white image and the app comes alive.  Two woodland fairies, Blue and Belle, fly onto the screen and introduce themselves.  They ask you to help them save the precious bluebell woods from Big Old Foot, the clumsy giant and they will set you challenges along the way. As you move your device around, the animation rather cleverly incorporates the live backdrop of the woods, giving the animation a greater sense of reality.

Arrows mark the route of the trail, which winds alongside the tumbling Becka Brook. At each numbered trail marker there is a picture to be scanned to mark your position on the trail.  Blue and Belle tell the next part of the story and you become their helpers, helping them protect the bluebells from the clumsy giant.

One of the 6 trail markers

As the path winds away from the Brook the woods fill with bluebells, they line the paths and carpet the woodland floor.  The bluebells almost stole the show but on a damp Dartmoor day, the mood was perfect for a leap into the world of the imagination. Every surface of the wood was covered in a lush green carpet of moss and ferns, which gave the woods a beauty and a mystical quality. It was easy to see how following these animated characters around the woods, could fire children’s imagination of a magical world, where even woodland fairies could exist. 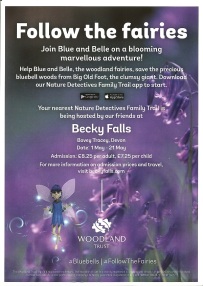 If you would like to try the Follow the Fairies trail at Becky Falls you just have until 21st May. You can download the app on the Woodland Trust website – admission charges for the Becky Falls Woodland Park apply, to take part in this trail.