People have lived and worked on Dartmoor for thousands of years and evidence of this history can be found on the ground today …if you know where to look. The East Dartmoor National Nature Reserve and Bovey Valley holds many clues and can tell many stories about our ancestors’ lives in the area. A new walking route, Hisley Heritage Walk, has been designed to encourage people to become historians as they follow a five kilometre trail through Hisley Wood. The description of the route promises to tell the story of medieval farmsteads and ancient tracks in the Bovey Valley, so it was with anticipation that a couple of us set off, to see what we could discover. 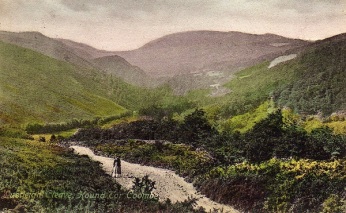 An old postcard depicts a view of the past (Lustleigh Society) 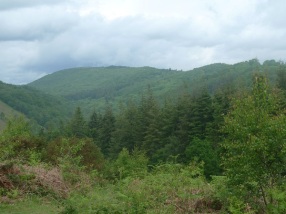 The walking route starts at the car park at the edge of Trendlebere Down, with a stunning view of the Bovey Valley.  Here the walk leaflet displays a copy of an old postcard which propels you back in time, picturing a lady in long skirts and hat standing on the Old Manaton Road, with the valley unfolding behind her.  You are confronted with contrasting landscapes and a challenge to match the old with the new. As you walk from the moorland, into the wooded valley, you follow the route of this old road. Prior to the current road network, the Old Manaton Road used to provide the only link between Bovey Tracey and the village of Manaton. 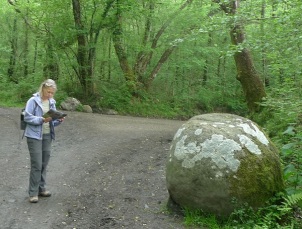 Before you leave this old road to cross the river, you come across the Pudding Stone – a rounded granite boulder, that when dusted with snow resembles a Christmas pudding! Embracing our role as historians, we were intrigued to find a symbol etched on the face of the boulder. Later research revealed this to be an OS Benchmark, a network of these markers were used by the OS to record heights above mean sea level. Not quite the mysterious mark we had imagined, but it was interesting to learn that the boulder is marked on the Devon 1888 OS map, recorded as 235ft above sea level (see OS Benchmarks database). 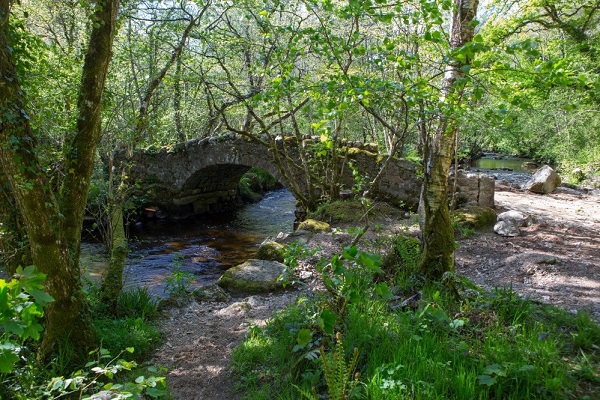 The route lead us across the River Bovey using the stone packhorse bridge, this arched granite bridge is full of Dartmoor character and was used for many years to link Manaton and Lustleigh to the farms of the area. Two old farmsteads are located close to here, one of these is Vinnimore farmstead, that was recently excavated by archaeologists and local people. The walking route guides you up the hill towards the ruins of another larger farmstead, called Boveycombe.  As you reached the site, you start to see signs of old walls and boulders under the trees. Originally built by medieval farmers in the early 14th century, the site was abandoned in the early 20th century and is now cloaked in ivy, moss and ferns.

The walls of the old farmstead have been reclaimed by nature

It was with anticipation that we followed the zigzag path upwards towards Heavens Gate. This meadow area, littered with mossy boulders and tall oaks lived up to its romantic name.  This is part of Lustleigh Cleave and this area is important for the variety of lichen that are found here, benefiting from the clean air in this elevated part of the valley.

The route from here takes on a different character, you have left the woods and now follow an ancient route that leads onto a quiet lane.  The route leads you into a pictureque farmyard. Sitting amongst the buildings is one of the features we had been looked forward to seeing – an ash house.  This small granite building with a conical roof was built as a safe repository for hot wood ash from domestic fires, to avoid sparks from embers setting thatched roofs alight.  Few ash houses are known outside Dartmoor.

Soon the walking route returns you back into the top of Hisley Wood.  As we dropped down the valley side the woodland opens up, with spectacular views of Trendlebere Down and you can see the starting point of the walk in the distance. As you drop down to the River Bovey you retrace your steps to the start.

If this has inspired the historian in you… you can download the walking leaflet and map Hisley Heritage Walk 1, Hisley Heritage Walk map or you can pick up a copy of the leaflet outside the Natural England office in Yarner Wood. This is the first in a series of walks, that will focus on the fascinating heritage of this area – look out for the next in the series coming soon…