“Hours of Frustration and Fun” – this was the description given to me by a ‘mother’ last month, at a moth identification event in Yarner Wood.  In the world of Lepidoptera a mother (moth er) is someone who records moth species – either in the field or in a non-lethal light trap.

There are approximately 2,500 species of moths in the UK – compared to 59 species of butterfly – and unbeknown to many owners an average garden can host 100 plus species over a year.  Due to their widespread nature and sensitivity to change moths are useful as ‘indicator species’, providing information about environmental changes such as impacts of farming practices and air pollution. Maximising information about species status, in terms of distribution and numbers, is vital to inform and evaluate conservation, research and policies.

Here at East Dartmoor National Nature Reserve moth recording has been carried out since the 1950s, through the national long term Rothamsted Insect Survey, run by Rothamsted Research. The Yarner Wood Rothamsted trap is part of a national network of traps contributing to long term data for both the NNR and the national picture. Moth monitoring contributes to NNR scientific monitoring and research, which is a primary function of National Nature Reserves.  This has been a continuous aim through Natural England’s many organisational and name changes over the decades.

Nationally the bulk of information about moth species and numbers (20 million plus sightings to date) comes from the National Moth Recording Scheme (NMRS)
which has been operational since 2007. Prior to this, decades of mothers were providing records to County Biodiversity Records Centres. The NMRS is open to all – sightings can be uploaded if you are sure of identification – which has increased participation and the volume of moth data available, at a time when the conservation need for such data is vital.

Moth recorders are sometimes referred to as ‘amateur’ entomologists as they are frequently recording moths in an unpaid role, but this is a complete misnomer as these individuals are self-trained to a high level.  This expertise leads some mothers to the role of County Recorders, who in Devon check and verify records before they find their way onto the National Biodiversity Network via the Moth Recording Scheme.

Devon Moth Group recorders have been giving their expertise, time and enthusiasm to running moth trap events within the NNR for a number of years, inviting audiences to view moth recording in the light of day. This introduces the diversity and beauty of moths to local people, giving time to examine specimens and ask questions, rather than poring over a light trap at midnight! At the latest event 30+ people rolled up early to view the emptying of the traps in the comfort of the Woodland Centre at Yarner. The recorders themselves, Barry and Malcolm, had the discomfort of sleeping on the concrete floor of the Centre to monitor the traps and equipment overnight.

Light traps are used to attract night flying moths where they can be inspected and released unharmed.  There are a number of theories why night flying moths are attracted to light.  Their behaviour may be related to ‘transverse orientation’ whereby moths usually navigate by flying at a constant angle relative to the moon – the light trap affects the light source angle as moths fly by – which confuses them.  The moths settle into egg box containers within the trap and are released after inspection.

Moths are often thought of as being the uninspiring relations of butterflies – little dull jobs – only seen in the depths of the night and although there is an element of truth in this, many are as bright as butterflies and have complex and fascinating life cycles.

Within Yarner Wood some species are intimately linked to the ecology of the oak woodland.  In the Victorian era of species collection, many moths were given spectacular common names, from the ‘Setaceous Hebrew Character‘ to the ‘Snout’.  The Bilberry Pug Pasiphila debiliata  is a micro moth, resident within the bilberry field layer, the larvae discretely spin themselves into bilberry leaves during the day and come out to feed at night. 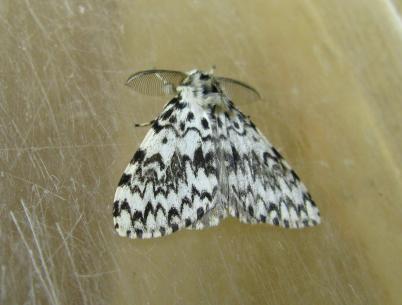 Snout (left) – larvae feed on oak trees and hide amongst the bark crevices.
Black Arches – the life cycle of this species is intimately connected to oak trees

One of the most significant moth relationships within the wood is the emergence of the caterpillar larvae population, timed to feed on the newly emerging oak leaves (before increased tannin levels make the leaves unpalatable).  These are a vital source of food for developing chicks of both resident and migratory breeding birds. Ongoing research of this relationship considers the interaction between oak leaf burst, caterpillar availability and bird migration arrival times in the light of climate change. A more recent area of study within Bovey Valley Woodlands looked at the foraging preferences of Barbastelle bats on moth species (view the report here). 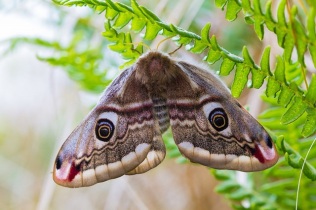 The spectacular Emperor Moth (left); the large Humming-bird Hawk-moth that can be seen nectaring in Devon gardens after spells of warm weather

Many macro-moths are active or easily disturbed during the day, and records of these are just as important as nocturnal species. This is a good introduction to moth identification – butterfly ID books often show the common day flying moths that you are likely to see.  In Devon gardens the Hummingbird hawk-moth Macroglossum stellatarum and Jersey Tiger Euplagia quadripunctaria can be seen nectaring after spells of warm weather.  When out walking on Dartmoor in spring, male Emperors are a memorable sight flying low over the heather following the scent of females from a kilometre away, whilst the females adhere to the more familiar night flying habits.  The Brimstone moth Opisthograptis luteolata, as opposed to the larger more well-known Brimstone butterfly, can be seen flying at dusk near the hawthorns and rowan trees in Yarner.
…………………………………..
If you are interested in learning more about moth recording then good starting points are…
Annual Moth Night, 12-14 October 2017 – events running this weekend (organised by Butterfly Conservation and Atropos)
Devon Moth Group and the Butterfly Conservation also both advertise events on their websites.