From Yarner Woods in the south across Trendlebere Down, to the chain of woodlands along the Bovey Valley, the woods and heaths of East Dartmoor National Nature Reserve comprise a patchwork of habitats, that shelters an abundance of species.  The woods along the Bovey Valley include the riverside Pullabrook Wood, Hisley Wood that rises out of the valley and Houndtor Wood that sits on a steep ridge between the Becka Brook and the River Bovey. To truly understand this landscape you would need to soar high above the Bovey Valley.  In this blog you have the opportunity to do just that – in December 2017 we asked Tom Williams from Dartmoor UAV Services, to take us into the air using his Unmanned Aerial Vehicle, or drone. 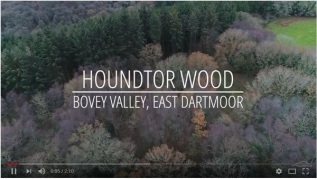 In the first film, Tom Williams has captured some breath-taking footage of Houndtor ridge and the steep valleys of the Becka Brook and River Bovey on either side.  Houndtor Wood was planted for timber during the 20th century and is now undergoing a restoration process, where the pockets of remaining semi-natural woods will spread as it changes its character to become a better habitat for local wildlife. The dramatic ridge, with its planted blocks of timber trees, can best be appreciated from the air.

This elevated location provided our ancient ancestors with a vantage point, the ideal place to build the “promontory” fort. Situated on the highest point and overlooking the River Bovey, the site would have been defended with earth ramparts and wooden palisades. As you watch the footage look out for the planted blocks of conifer in Houndtor Wood with some stands of beech wood timber between them. The Woodland Trust will gradually remove many of these conifers to allow more sunlight to penetrate the woods and regenerate the wild habitats.

View the footage here – Flight 1 Houndtor Wood  This UAV footage was captured in December 2017, just before some of the tallest sitka spruce were felled adjacent to the promontory fort. Enjoy the flight!

The second film, again made in December 2017, shows Pullabrook Wood, also in the Bovey Valley. This is an interesting wood as, from the air, you can clearly see defined areas of Douglas fir, some pockets of broadleaved trees, an area where a stand of larch was felled in 2016 and the riverside meadow. This mixed woodland is located next to the heath at Trendlebere Down and the film captures the way the wood sits in the valley with the high ground of Dartmoor rising above it, before giving you views of Houndtor ridge in the distance.