Just six weeks on from their last visit, the students of the University of Exeter were back in the woods to continue their conservation task at the East Dartmoor National Nature Reserve. In that short time the seasons had changed and, on a cool morning, some spring time wildlife was waiting to welcome the students. Their aims for the day were to clear undergrowth around some of the archaeological features in the valley; two ancient farmsteads are being gradually revealed to allow closer investigation with an excavation in April. This careful clearance work is also creating a few sunny glades for woodland wildlife.

Beany explaining how to use “timber tongs” 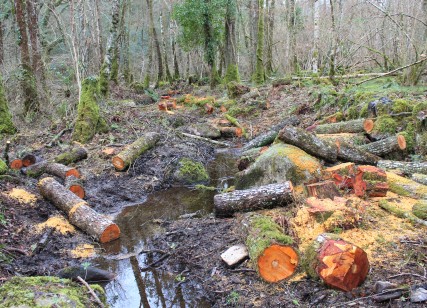 Logs lying where they were felled earlier that week.

Natural England Conservation Assistant, Beany was leading the team for the day and, while introducing the morning’s task, pointed out the wet woodland areas being protected during the future archaeological activity.

Beany pointing out the frog spawn in the wet woodland 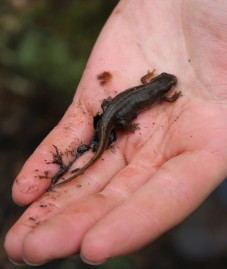 A common newt would also benefit from the conservation work

At Vinnimore farmstead, the team made short work of stacking logs, maintaining the free-flowing water from a woodland spring. This part of the site was now ready for the excavation so the students made their way to the next site to join their colleagues at Boveycombe farmstead.

Higher up the hill in Hisley Wood, the sun had begun to warm up the chilly air and two bonfires added to the warm atmosphere. The areas around the farm house ruins were once meadows and, clearing back the tangled vegetation and brash from the removal of some large conifers, will recreate a woodland glade. Wild flowers and woodland insects will have a chance to thrive here and, as spring was beginning to put on a show, some of the Bovey Valley oil beetles were starting to make a move.

Oil beetles emerge in the spring

Cutting and burning the cluttered brash was making an impact and the old farm meadow was becoming clearly visible when Caroline from the History Hunters arrived with home-made cake. As one of the regular Natural England volunteers and the wider conservation team, she wanted to show her appreciation of the students’ efforts. The layers of hidden archaeology were all becoming clear now!

The woodland conservation work and the forthcoming excavation at the East Dartmoor National Nature Reserve is all part of the Moor than meets the eye scheme, a Landscape Partnership scheme, that is funded by the Heritage Lottery Fund.