On the 16th June seven volunteers and staff  from Natural England (NE) and the Woodland Trust (WT) met up at Trendlebere Down for a “Wildlife All Nighter” in and around the Bovey Valley.  The intention was to spend the night on a variety of tasks, mainly to record activity that isn’t possible during normal daytime conservation.  We were based around Hisley and Rudge Meadow, courtesy of NE and WT, with the idea of making no impact on the local environment due to our presence.

The focus of our plans was to set up moth traps in Hisley/Rudge Meadow and to record blue ground beetles on the slopes above and adjacent to the Becka Brook.  Along the way we would monitor any other wildlife such as otter and deer.  A remote camera was set up alongside the site of Vinnimore farmstead, specifically to capture any footage of otters.  The group split into two areas, one group setting up the moth traps, while the other group prepared for recording blue ground beetles, in pre-selected 50m square boxes.

The beetle surveying started at 10pm when it became fully dark.  The idea was to record the presence of any beetles and note the immediate habitat, food source and weather conditions, if any were found.  The ground was very dry and we found plenty of slugs, which are the main food source for blue ground beetles.  However, on the night, only three beetles were spotted.  Whilst surveying the area we did come across a classic sign of goshawk activity, freshly plucked pigeon feathers, on the bough of a tree about two feet off the ground.  It had clearly happened fairly recently.  I was also interesting to see pairs of eyes in the dark woodlands reflecting from our head torches.  It was impossible to know what the eyes belonged to, but there were a couple of suspected sightings of muntjac deer.

The sound of nightjars calling were heard in the distance and they can be seen near both of the car parks on the edge of Trendlebere Down.  Albert Knott, from Natural England, told us that if you walk round the fire breaks (the cut routes on the heath), you can also see glow worms at night, at about 10pm.  The beetle surveying finished at 1am and a bit of skilful navigating got the team back to Rudge Meadow!

After a couple of hours rest we set off for Bovey Combe at first light.  We were accompanied by a birds, singing in what remained of the dawn chorus.  The mire in the combe was alive with all sorts of different plants such as; cotton grass, heath spotted orchid, bog asphodel, round leaved sundew and pale butterwort. 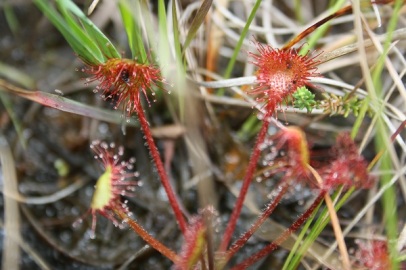 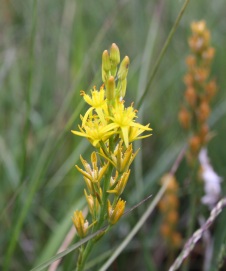 On arriving back at Hisley Meadow we started to record the contents of the moth traps and it had been a very successful night.  It was fascinating to see the variety of size, shape and coloration of the moths which included Waved Carpet, Blomer’s Rivulet and Double Line (all nationally scarce species). Altogether at least 85 different species of moths were recorded. 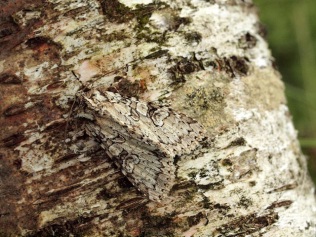 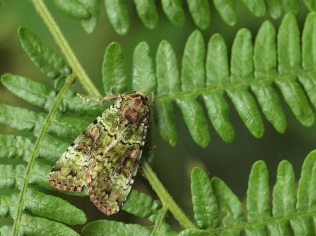 A quick check of the river around Rudge/Hisley meadows revealed plenty of otter activity, signified by a wide age range of spraint in various places, some of which was very fresh, from that night or the day before.

On completion everything was packed up and complete by around 8am, so the first dog walkers of the day would not have noticed any signs of the previous night’s activity.  To round the night off as we walked back along the river a kingfisher sped by in a flash of electric blue.

The night was very successful and showed a small cross-section of the wide diversity of flora and fauna that the East Dartmoor NNR supports.

With thanks to Simon Smith, NE volunteer, for writing this report and to moth expert, Phil Sansum for the moth photographs